In these recent years, there are exploding wave of people of using smartphone-linked infotainment systems in their cars. Most prominently are Apple CarPlay and Google Android Auto, which are supporting smartphone running on iOS and Android respectively.

The systems are installed in car's display head unit, usually being assembled by the manufacturers or also can be installed as aftermarket.

What is CarPlay? CarPlay is an Apple standard that enables car's head unit / infotainment system to be a display and a controller for connected iOS devices either wired or wireless. 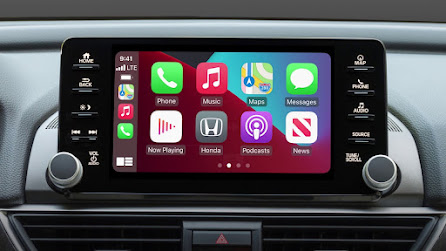 It was introduced since iPhone 5 with iOS 7.1. Initially Apple called it as 'iOS in the Car', then later renamed it as CarPlay in March 2014.
As default Apple provides CarPlay compatible apps:

Also some other popular apps usually being used inside the car also support CarPlay:

There are only certain types of apps that are allowed to be deployed to CarPlay:

3. Auto-maker made apps to control vehicle-specific features. But usually those features are inside the original head unit system.

Apple discourage typing using CarPlay compatible apps. Apps like Apple Music and Spotify doesn't allow typing for searching the music. Instead there is a button to tell Siri what do you want to play. Therefore, if you want to search something that is not dictatable name of artist, you are out of luck. To meditate that, you have to pull out your phone and type on your phone.

CarPlay is wonderful to display the content of your apps on the car's unit screen, compared to smaller smartphone's screens. Especially when using navigation, you can see the larger maps and easier to see. For navigation, thankfully, you still can type on the head unit display, or even better just use voice dictation (when the place is easily dictatable).

Usually, we will have a dedicated button on car's steering wheel for Voice Command. In this case is to activate Siri. So you can do a lot of permissible actions on your CarPlay with Siri.

Rearrange the icons on CarPlay Home

You can rearrange the icons on CarPlay by open settings on your phone, go to General > CarPlay, select vehicle then tap Customize. Refer here https://support.apple.com/en-gb/guide/iphone/ipha5936fe07/ios

I think having CarPlay (or Android Auto) is a great way to manipulate your phone without directly touch your phone while driving. While it has larger screen, it's also optimize for simple operation without needing more accurate button area. Meaning that the user interface only show the most important UI for driving mode. While sometime we wish want to do more, then we have to open back the phone. Therefore, the normal way we use phone on car is to put on the holder is sometimes need but not often. And when I am driving for a while, connecting with wired CarPay can be cumbersome for just playing music. Therefore, some carmaker still providing Bluetooth connectivity for audio, so I can just use Bluetooth only.

Overall, I am positive about the features and looking forward what Apple and Android can bring in the future.