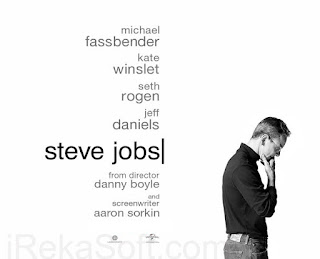 I've been reading, listening (audiobooks) and observing human named Steve Jobs. Previously Steve Jobs was appear as himself in movies. The classic one 'Pirate of Silicon Valley' and after that it was movie named 'Jobs' played by Ashton Kutcher, in 2013. Last year there is a new Steve Jobs movie directed by Aaron Sorkin. It based from the book written by Walter Isaacson.

The movie Steve Jobs 2015 is moved around 3 Apple product launches. It has a lot of things happen before, and after the 'Keynote'. Related stories are shown as flashback.

There are something new that I discovered.

Woz made the Apple II with open system. Steve Jobs don't want make the computer to be a geeky. He wanted to make it as utilities. You know by have this vision, he wanted any, average people on the world use the computer use it like a television, or toaster. It has bigger market than, making the computer for hobbyist or hardware junkie. It was against what Steve Wozniak thought about.

Woz was not satisfied with Steve Jobs. Woz was the man that doing the engineering genius. But on the media people said Steve Jobs is a genius even though in reality Steve Jobs didn't know how to code, how to engineer. "What do you do?" Woz asked. "I play the orchestra and you play greatly as instrument player".

What good about Steve Jobs:

That is the core of Steve. Because of his vision, he get up and wanted to create personal computer, computer for the rest of us.

2. Practically Perfectionist (Be better than anything you have seen)

In business and marketing perspective, unique selling proposition (USP) is extremely crucial to make it successful. Steve Jobs rethought everything.

Understand human. Pretty much Steve Jobs knew what human want, what human desired. What human need to be empowerd. And he knew human loves simplicity, and that is what Steve Jobs did.

Emotional drive on making a product or marketing campaign.

Steve Jobs keep the drawing of Lisa made on original Mac.

5. Ruthlessly Working and a Pusher

He don't take easy on his job. He is really serious.

Steve also know how to push his employee to follow what his vision.

Ego is good if in control, to make great product. But having too much will make you seems like an ass-hole, especially when dealing with people.

Crediting his people on their jobs.

'A diskette on pocket of shirt'. 'MacBook Air inside the evelope'. 'Thinnest smartphone in the World". "iPod fit in your jeans pocket".

In term of marketing, it make people gonna to remember that catchiness, the cool factor of the device.

What bad about Steve Jobs

However Steve seemed to recover the problem time after time.

What to take from the movie:

- Having a product launch event is crucial for big company. Other way around is use other conventions. The 'Keynote' presentation. It's crucial to get people see your presentation, get known, get excited and get to be loved (if possible).

- iReka Soft has experience in participating in event as exhibitor. But, we will have an event to introduce our products. By watching the movie I agree, the product launch can be very important to let.

- On Event Part, we can relate with program / presentation done by Dr Azizan and Richworks team. They made a very high-energy aura among the participant.

- Steve Jobs took care about the 'keynote' very seriously. He rehearsal the keynote to the employee, and the employee participate and give good feedback to him. The employees were so supportive.

- Steve Jobs is marketing genius. He was also a genius leader that can gather genius enabler (engineers, designers, operation, HR and many more). His rules was hire A people. A people attracts A people.

- Steve Jobs create product that he was also wanted. Not because just market potential.

If you make presentation, take care of your time, use this app to help.